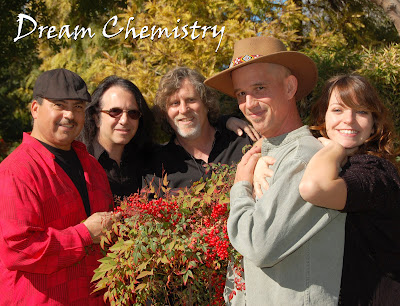 EXPERIENCE IS ABUNDANT WITHIN THE GROUP
DREAM CHEMISTRY has collectively written and composed an extensive set of material.  Their engaging live performances have appealed to a very wide audience.  It's not unusual to see three generations enjoying Dream Chemistry in a live setting.
JIMMY CATERINE - 6 & 12 string guitars, vocals

Jimmy has numerous album credits to his name. He is most noted as founder, guitarist and co-writer for 80’s metal quartet, Sacred Rite (Capitol Records.) He has worked with top name professionals in the industry including Grammy Award winning producer Sonny Limbo (Bertie Higgins) and publishing coordinator Randall Wixen (Fleetwood Mac, Jackson Brown.) He has toured extensively.
Aside from his original projects, he had a 3-month stint, playing guitar with the stage production of Rocky Horror Picture Show in 1987. He played for MGM recording artist and powerhouse vocalist, Sami Jo Cole (Tell Me a Lie) in 1995, and with classic rock tribute act Time Machine on the Las Vegas convention circuit in ’97 and ’98.
Following a car accident in 2001, Jimmy Caterine took a break from performing and was reluctant to return to the stage due to traumatic stress.
During the time between 2001 and the formation of Dream Chemistry, Jimmy released 2 independent solo records under the name Caterine (2003-2005) and a reunion disc with Sacred Rite in 2007, which was also an independent release. He also made a guest appearance on the album Almost Fully Recovered by electronic/techno artist Warren Peace.
NEAL HARRIS - bass, mountain dulcimer, djembe, cajon, udu
Neal started his musical career late in comparison to many of his peers. His close relationship with, bassists, Kenny Chaisson (Keel) and Greg Chaisson (Badlands) influenced his early direction as a musician. 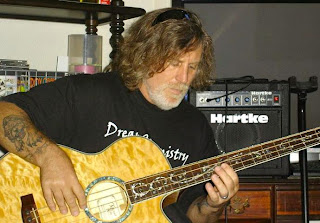 By the mid 80’s, Harris was recruited to play with, local Phoenix, Arizona favorites, Redrum and his musical course was set. In the years to follow, he received moderate radio success on Z-Rock and, Phoenix’s own, KUPD with the groups Blaque, Contact High, and Dreamaster. He has opened for several national acts, including Stone Temple Pilots.
Additionally, Neal recorded with The Investigators featuring, folk singer, Mark Wilson and world-renowned drummer, Grammy Award winner, and Rock & Roll Hall of Fame member Hal Blaine (Elvis Presley, Simon & Garfunkel, Carpenters, and the Beach Boys.)
Neal has a great passion for nature and in recent years has connected with his ancestral lineage of Incan Shamanism. He enjoys experimenting with various sounds and world instruments in the development of sound healing and works closely with Angels on Earth Healing Ministries in an effort to give back to the community.
In Neal’s own words regarding Dream Chemistry he claims that, “With the diverse range of talent and splash of world instrumentation, I feel we have found a very unique sound that could appeal to everyone. I am very proud to be a member of this group!”

DELLYNN MARIE - lead vocals, guitar and percussion
Dellynn began her musical journey singing in spiritual centers from the age of 10. For the past five years she has led music for youth groups, which includes arranging special music and teaching the youth choir.

Dellynn is now spreading her wings to stretch her talent. She has written and arranged over a dozen original compositions including a song, which she performed for the indie film Collapse, produced by Bivas Biswas. Dellynn has hosted and performed for Rubicon Café and also performs with G Owens and Soltron.
Though Dellynn has very little formal training, one would think she was trained by the absolute very best! Influenced by everything from R & B to Jazz to Rock, her soulfully smooth and HUGE tone has brought to Dream Chemistry the depth that they have been searching for since the core was complete in 2008.

Michael Began studying the violin in the 3rd grade for the Oak View School Orchestra. Within his first year of playing the conductor suggested that he audition for Marin Symphony’s youth music program Workshop For Strings, with Hugo Rinaldi as its music director. Michael passed the audition and in the spring of 1969 he began taking private violin lessons with Charles Meacham who was the concertmaster of the Marin Symphony Orchestra.


Ø  1971- Accepted into the Marin Symphony Youth Orchestra
Ø  1973- Accepted into the Orchestra Piccola, a chamber orchestra under the direction of Hugo Rinaldi.
Ø  1975 and 1976 – Attended the Aspen Music Festival at Aspen, Colorado
Ø  1977 – Selected as concertmaster of the Marin Symphony Youth Orchestra
Ø  1977 – Began private lessons with Roy Milan, the concertmaster of the San Francisco Ballet Orchestra.
Ø  1978 – Took part in the summer music program at the San Francisco Conservatory of Music.
Ø  1978 – Received a four-year scholarship to the Cincinnati Conservatory of Music.
Michael put down the violin in 1981 to join the military. He Settled in Phoenix Arizona after being honorably discharged from the Air Force. He began playing the violin again in 1997. Michael embarked on the long road back to technical proficiency on this difficult instrument playing by ear along with his favorite records, now CD`s. Revered influences include U2, Afro Celt Sound System, Anoushka Shankar, Joe Sample, Peter Gabriel, Keb Mo, Lightn`n Hopkins, J.S. Bach, L. Beethoven & G. Dead . . .
TITO VALENTIN - cajon, shakers & other percussion, vocals

Ernesto “Tito” Valentin grew up, listening to his father, a singer, rehearsing and performing with The Three Kings in Brooklyn New York. He was drawn to percussion from the very beginning. At the young age of 8 he would often watch his neighbor play drums through the basement window. Tito was later given that drum set as a gift.
Valentin was very involved with his church throughout most of his youth and played drums with the church band. He later joined the Marines and would DJ to make some side cash. After his term with the Marines, Tito settled in Phoenix Arizona and started a family and now has 4 children who are the light of his life and continued to DJ for many years to follow.
In 2007 a strange twist of fate brought Tito Valentin and Jimmy Caterine together. Tito expressed to Caterine how he had always wanted to play percussion in an original band but family life had never afforded him that luxury.  In 2008 Jimmy asked Tito to audition for Dream Chemistry and exceeding expectations, Valentin made the cut and is now a valued permanent member.


Their strong sense of community has led them to perform, help organize and raise money for several good cause organizations in Arizona. Included are Eve's Place (a safe house for women) www.safetyatevesplace.org , The Angels on Earth Healing Ministries (volunteer community outreach) www.theangelsonearth.org, the Merritt Center (specializes in programs for veterans with PTSD) www.merrittcenter.org and Homes of Mercy for Children (woman & children shelter) www.mercyconnection.com


Ø   “Dream Chemistry has performed at Storm Wisdom on several different occasions. They are always amazing! They have a unique sound that is all their own (Organic Fusion). They are always professional, energetic and fun! If you have a chance to hirer them... do it! BTW...check out their new video on YouTube for "The Wind"... It is my new FAVORITE!

Ø   To Neal and the rest of the members of Dream Chemistry. I don't think that I am qualified enough to express the words and feelings that I heard at the wrap-up meeting on Monday evening, but I will try.

"To a person, ALL members of the Committee, including myself could not express the admiration of the quality and range of the selections which Dream Chemistry performed. You did not play just music, you rose over and above the multitude to reach out to their souls." "They did not ask me to see if you would agree to come back next year, THEY BEGGED ME to please ask you to return, but also to agree to play LONGER to reach out to more of the crowd."

I read with great interest the list of where you have played. I think that you should list the Daisy Mountain Veterans Day Parade and Picnic as one of your list.

Ø "The music they create can fit so many venues and adapt to so many peoples taste! They truly are remarkable and great people!!!"

Ø "Dream Chemistry generously provided heartfelf joy in their musical offerings that contributed to the success of our fundraisers."

Ø   "Dream Chemistry has supported me with my Susan G. Komen Fundraiser for two years. Each time they have been amazing. I look forward to future opportunities of working with them and experiencing their performances."

INFLUENCE: Everything from Rock to Jazz, R & B to World Music, Celtic to Country.
GENRE:  With such a wide range of diversity, they have coined the phrase 'Organic Fusion' as their genre.

INTERESTS: Writing, Performing and Recording.  Sharing our beautiful creations in as    many lives as possible.  Top quality performances. 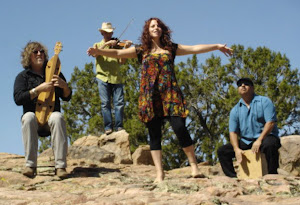 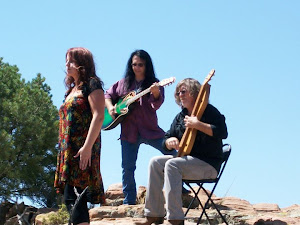 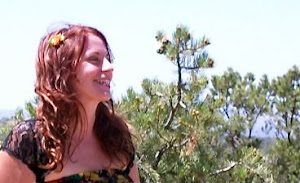 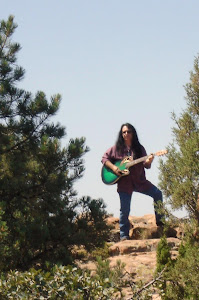 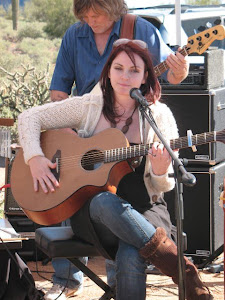 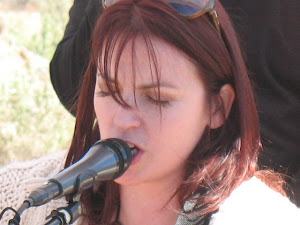 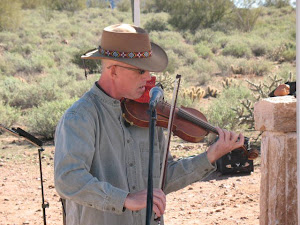 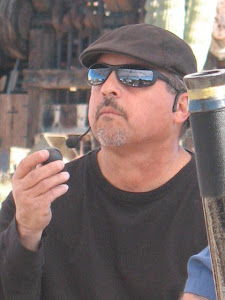 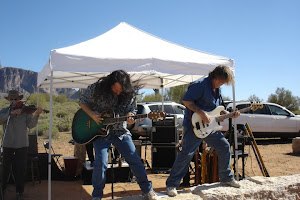 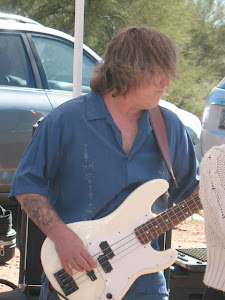 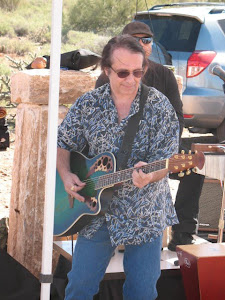 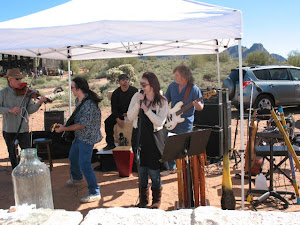 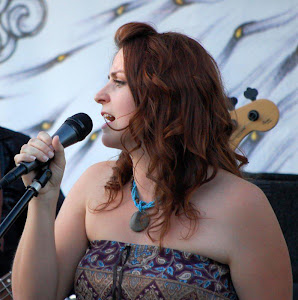 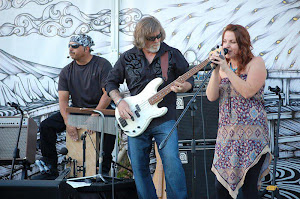 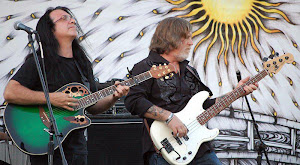 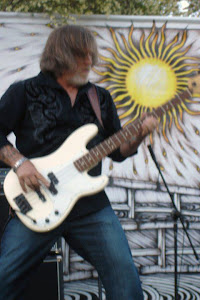 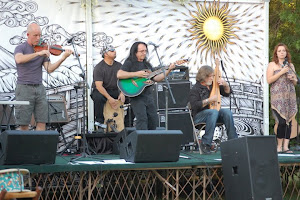